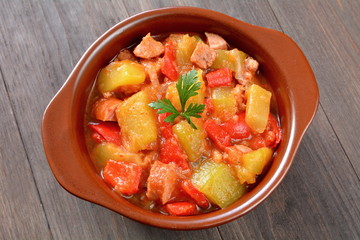 
A traditional Hungarian dish, this is a stew that can be made even more hearty with the addition of potatoes. Quick and simple to make, this is a one-pot recipe that can scale for next-day lunch leftovers. This is a Mark Bittman recipe.


This is an easy dish that my kids love! You can simply dump all ingredients into a large sheet pan and bake in the oven. No boiling potatoes, no precooking corn, no water, no draining. This one also makes it super easy for kids to learn their way around the kitchen.